A-Speedster is a Tier 6 ship in Starblast.io. It fires one frontal pulse with moderate damage, knockback, and recoil as well as two frontal diverging lasers. It is the fastest Tier 6 ship in the game, and also the most agile. Its narrow shape also makes it difficult to hit. It also has brilliant firepower, at the expense of shields. When played properly, this ship is deadly especially against slower, less agile ships. (Ex: The slower level 7s) 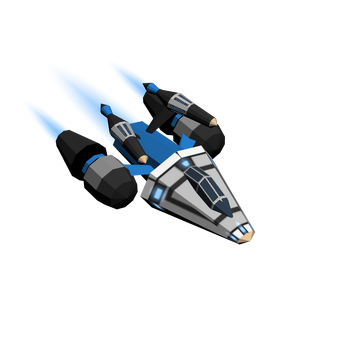 When playing as the A-Speedster, upgrade Energy Regeneration first before upgrading the rest of the stats. The A-Speedster is a decent ship un-upgraded but becomes truly strong only when fully upgraded. It does extremely well in dense asteroid fields as well as in open space, however, it is necessary to have some experience first. The weakness of the A-Speedster is its slow upgrade path. A strategy could be to fully upgrade the Shadow X-2 and harass other ships before upgrading to the Speedster. You could also use the Aetos to get to this ship, which is often preferable, since it is a faster miner, but vulnerable.

Tips: When dueling or fighting other vessels, take care not to ram(mainly if they have higher mass than you) and to use the superior agility to hit-and-run the opponents. Separate teams before taking them out one-by-one, using superior maneuvering abilities of the Speedster. When low on shields, use the incredible acceleration and good speed to quickly escape to regenerate shields. In Deathmatch, the A-Speedster proves to be an incredible kill-stealer, quickly earning points, while in Team Mode, coordinated A-Speedsters can very quickly kill enemies. Using RCS well, it becomes even deadlier. When loaded up with attack pods it becomes extremely deadly, being able to take down ships that are equal in speed or slower.

Almost always wait to use the main pulse, because the side lasers do tiny damage and face outward, making them not very useful. Using RCS with this ship can be deadly, as most people will only be shooting one main pulse at a time from a maxed-out A-Speedster. The A-Speedster also has good shield regeneration (when maxed) to make hit and runs very effective, to where if one is skilled enough you can kill Odyssey and Aries. But if you get hit most will just about instantly take off the shields because they are not very high and you will take insane knockback possibly hitting an asteroid and taking even more damage making it easier for them to kill you.

A-Speedsters should be careful around ships that can easily out-health them, such as the O-Defender, as it will take a long time to whittle down their health. Fully upgraded scorpions are best avoided, unless they are unskilled, low on shields (But mind gem-poolers), unmaxed, or you have team mates to back you up. Similar goes for Advanced Fighter, because they can take out nearly all of your shields in 2 hits, and if they are skilled enough will possibly kill you in a matter of seconds. Don't forget that speed is your ally as this ship!