The Advanced-Fighter is a Tier 6 ship in Starblast.io. It fires one frontal pulse with immense damage and knockback, and four small side lasers from the front, and like the Shadow X-3, it is a typical glass cannon ship. Its frontal pulse has the highest damage per hit of all Tier 6 ships (when fully upgraded, matching the pulse damage of a Tier 7 ship), and as such, has to wait between shots to regenerate enough energy to fire its pulse. It's regarded as the second-best possible ship to get in team mode and/or survival mode, after the best ship, the Odyssey. 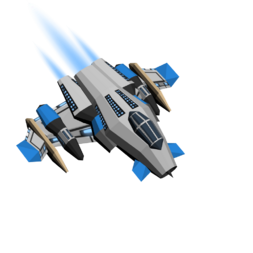 The Advanced-Fighter has relatively weak shields for its tier, being an offensive ship. The initiative is vital for this ship, and if it can get the first shot, it will almost always win the duel, due to its immense firepower. Never use the small lasers while fighting, except to finish off an opponent who is nearly destroyed. The frontal pulse will deal massive damage and destabilize the target and send it flying off the screen if its mass is low. It is necessary to use the environment well, and send the target on a collision course with asteroids, while ensuring one never enters a sparse asteroid field as the Advanced-Fighter.

When playing as this vessel, you should upgrade your Energy Regeneration first, then max out the shields and energy capacity, Damage and Ship Speed, and then the rest of the stats. While widely considered to be the best ship in the game, this ship is particularly bad against teams, so try to scatter your targets if they are teamed up, before picking them off one-by-one.

This ship's mass is small for Tier 6 ships, so it mines slower than other ships like the O-Defender and Rock-Tower, despite having 60 energy regen compared to the other ships' lower energy regen. Don't deplete too much of your shields when ramming asteroids, which would give a good chance for fast ships to kill you. The low shield regen also makes it ineffective. With high energy regen at 60, this ship is the best ship in Tiers 1-6 for healing and attacking, tied with the U-Sniper for healing output. However, other ships like the Howler heal almost as fast (50 DPS), while being smaller and thus harder for attackers to hit.

The Advanced-Fighter shares many characteristics with the Shadow X-3 and the Pulse-Fighter, and tends to have the opposite specifications to the O-Defender, on the other end of the ship tree.

When fully upgraded, this ship's pulse does as much damage as the Aries' pulse, even though the Aries is a Tier 7.

Secondaries: It is best to use defense pods on the Advanced-Fighter. This is because the pulse does large knockback and damage, so you don't really need extra firepower, and since it does large knockback, and the attack pods only attack enemies that are close, they won't really be doing much anyway. Furthermore, it has the second worst shields of any Tier 6, beating only the A-Speedster, and defense pods let you take extra shots, so that can be useful. The best secondary setup is either 5 defense pods and 1 pack of missiles, or 2 packs of missiles and 4 defense pods.

The only upgrade path is Fly > Delta-Fighter > Pulse-Fighter > Vanguard > U-Sniper > Advanced-Fighter. The Vanguard is a large drawback. Its speed, firepower, and shields are very bad. Upgrading it only makes it a little better. The only good part of the Vanguard is its agility, which is the highest agility of T4. The Pulse-Fighter is an amazing T3, with decent shields, awesome firepower (for it's tier), great speed and agility, making it the best T3. The U-Sniper has recoil and is best with RCS. It is a very powerful attacker and can kill T7's. The downside is its weak shield. It's the best T5, tied with the Howler. The Advanced-Fighter can upgrade to the lethal Shadow X-3, and the overpowered Odyssey. The Shadow X-3 is fast but has low agility. It does 200 damage per shot, and it can kill any ship in a 1v1 if used properly, but it has mediocre energy regen. For that reason, it is best to upgrade to the Odyssey, which has the highest 150 empty DPS in vanilla. The Aries has 175 energy regen, but its pulse only does 105 DPS. In addition to firepower, the Odyssey has 750 shields, very good ram damage, and amazing shield regen, making it a very powerful ship. The only downside to the Odyssey is that it is very slow and has very bad agility. It is usually much better to upgrade to the Odyssey than to the Shadow X-3.

If Damage is upgraded too many times, the pulse cannot shoot. Refer to this table of (energy cap - pulse damage), which must remain non-negative (row = damage, column = energy cap):

As the table shows, damage must not be upgraded more than 3 times plus the number of energy cap upgrades.