Aetos is a Tier 5 ship in Starblast.io. It fires two slightly converging side lasers from the front that do moderate damage. It is moderately good at mining asteroids with a good ship speed, but is very weak against enemy vessels unless fully upgraded. 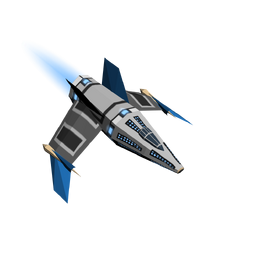 The Aetos makes a good hit-and-run ship, however, it is very vulnerable unless fully upgraded. Unless you want to quickly mine up to the next tier, It is recommended to upgrade Energy Regeneration first, though not to the maximum, because it already has exceptional regeneration. To be able to mine faster, upgrade damage, and upgrade Ship Speed to easily escape should the necessity arise. It is not recommended to maintain this ship, rather, use it only to upgrade to the A-Speedster as soon as possible. The recent change in making the shots converge makes the Aetos slightly better and less vulnerable. Despite this, the Aetos must always be at move, for it cannot withstand much damage, mainly because of the relatively weak firepower and low mass. If you buy attack pods it can make up for it's weak firepower. This ship has worked well with attack pods and heavy mines. (The second setup doesn't work well now because of a recent update.)

Despite its extreme weakness when unupgraded, the Aetos can be a powerful ship when fully upgraded. The trick to this is to rush in and ram while shooting the enemy vessel and should the battle not go well, escape quickly with the speed, making it a good hit-and-run ship. It is vital to note that this ship is still very weak against vessels that are small in size, such as the Shadow X-2, even when fully upgraded. It is recommended to use this ship at long range to get both lasers to hit. If you have good aim and both shots hit, it has good DPS.

The Aetos makes a good miner - even unupgraded it has decent energy regeneration.