Barracuda is a Tier 6 ship in Starblast.io. It is a ship meant purely for ramming and fires nothing. Instead, it has an ability called "Dash", essentially charging ahead at increased speed to ram, inflicting impact damage. As a result, it has no effect at long range and needs to get to point-blank to engage. 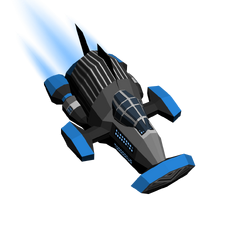 The Barracuda features decent shield capacity and regeneration (which is very quickly depleted due to the need to ram, and thus, it is recommended to upgrade it first), but lacks energy efficiency, having average capacity and low regeneration. It also has very low agility, as well as a rather large size, making it quite difficult to maneuver, as well as rather low speed. However, it has an immense mass, allowing it to easily crush asteroids and knockback other ships to long distances. The Barracuda can be great if you want to get to level 7 immediately.

As a result of these features, the Barracuda makes for an excellent mining ship, provided the shield capacity and regeneration are upgraded, mining crystals at a very accelerated rate, but also being weak against other player vessels, due to the need to make contact. With the advent of RCS, the Barracuda is essentially worthless against any ship making use of it, except in dense asteroid fields and even then a skilled pilot can kill you. In such areas, the Barracuda can easily ram other ships to death without allowing them to escape, and also dealing very high damage due to asteroid impact on enemy ships. One advantage it has going for it is a mass rivaling that of an Odyssey. Because of this, it takes little knockback from most attacks, and can quickly regain lost gems. Making use of this, and equipping attack pods makes it the only tier 6 ship in the game that can use brute force (instead of RCS and dodging) to take down a fully gemmed Aries. It is still a fight that can take minutes long, as both ships are incredibly hard to kill. In Team Mode, it can be useful against large ships such as the Odyssey or low mass, low agility ships like the bastion.

It is almost never recommended to choose the Barracuda in Deathmatch, maps are uncertain, getting kills is very difficult, and enemies can use RCS to crush it, by simply turning back and firing while moving off, and the Barracuda can never reach them, the rounds with them take forever to complete especially when most people are using the Barracuda.

The barracuda makes up for its weakness in Deathmatch by being possibly the best ship in survival mode and it's high effectiveness in team mode. It is easy to reach, incredibly easy to max (0 mining pods needed), and can rack up large amounts of credits, along with having high survivability. Due to this, a player with a partially maxed barracuda will often be facing off against level 4 and 5 ships, which just can't dish out the DPS to kill a barracuda, apart from the U-Sniper. Even when other people catch up you can hide/mine in a dense asteroid field (thanks to an update every survival mode map I've seen has a dense asteroid location), and this gives a huge advantage against any potential attackers. If played properly, a barracuda can easily rack anywhere from 3-9 thousand credits in one survival mode game, which is more than enough to completely demolish any ship of any tier. The way you choose to do so is up to you, but I recommend using attack pods and/or heavy mines for Aries, and Heavy Mine circling for Odyssey. Torpedo spam also works if you're in the 4+ thousand range. Barracuda serves as a counter to Bastion anyways, and Shadow X-3 just cannot deal enough damage to kill you, and will likely get clipped on asteroids once the arena closes in. The biggest counter to skilled survival Barracuda players is killing them while they are still at lower levels, or to just cheat and bring a large team.

In team mode, the ship is one of the fastest miners in the game, especially with healer ships to support it. The ship loses shields relatively fast, even with shield regen maxed, but it can use its gem pool to mine quickly without shields. It's combat effectiveness is elevated if the map has a dense asteroid field, as not only does the ship have high knockback when maxed, but being slammed into an asteroid at high speed is a relatively quick way for your victim to lose all his shields.