A skilled player using the Bastion can take on many enemy ships at once but has to be careful of its low shield capacity. Because of this it is highly recommended to mine a large pool of gems before attacking. 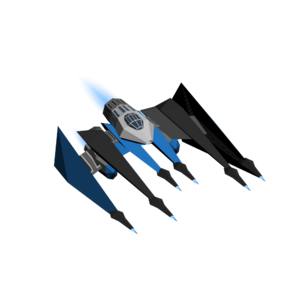 When fighting against a Bastion it is recommended to use pulse ships (like the Odyssey, Aries, Advanced-Fighter, Scorpion, and U-Sniper) because they can deliver large knockback while dealing insane damage, forcing the Bastion to turn for a lengthy period of time after being hit in order to shoot back due to its very low turning speed. But, a Bastion can still kill you if he deactivates RCS and avoids your pulses. The Bastion also has low mass, so if you use a ship with high mass and/or high knockback and hit the bastion into an asteroid field, it will be fairly easy to destroy as Bastions in asteroid fields are very vulnerable. Another strategy is to just use a ship with very high agility and speed and always stay behind the Bastion. For example, the A-Speedster is fast and agile enough to circle the Bastion faster than it can turn, allowing the speedster to slowly kill it from behind. However, this will not work if the Bastion's pilot is skilled and competent and uses RCS to slowly retreat. Never attack a Bastion head on in a 1v1 fight if you are not tier 7 unless if the Bastion has few shields remaining or is in a dense asteroid field. Attacking a bastion from the front, even with a group of ships can be very dangerous.

In Team mode, Bastions are brutal in groups. They are tricky because if the enemy team chooses to focus down 1 bastion, any other bastion will have the ability to fire upon the enemy team uninterrupted, and splitting firepower among the enemies in a team fight is never a good idea either. the best tactic is to pick off bastions away from their team 1 (Or with a large enough attack force, perhaps 2) at a time. If you have only tier 6 ships, throw everything you have at the bastions! Barracudas and Rock Towers can be used to knock a bastion off balance or even away from the fight while ships such as O-Defenders, Scorpions and Advanced Fighters can shoot large pulses to knock them back. Ships such as A-Speedster, Condor, and Marauder can use their speed to get to the side of or behind a bastion, but take caution if the bastion has attack pods (Which they often will in a large team fighting situation). If your team has access to tier 7s, the Aries and Odyssey are both valid choices for taking down bastion, but BE CAREFUL, as even 1 bastion being able to get its shots accurately landed on your vessel (Which isn't hard when you're one of the biggest ships in the game) will tear its shields apart at an alarming rate. Fighting fire with fire, or Bullet hose with Bullet hose in this case and using a bastion is another option, in which case having at least 1 healer can be very beneficial. Shadow X-3 is probably the worst tier 7 ship to use, as its poor energy regeneration does very poorly against the bastion's ridiculous shield regeneration. It is best if used in the back lines of their team to knock any already weakened bastions back with their pulse, possibly even killing them. A skilled player can also use the recoil to harass a bastion from the sidelines, but take great caution when doing this. if you have a healer and and X3 fiend, it will be far more devastating because if you want to destroy a base, it is the best ship to destroy a base or killing a ship, but beware of skilled O-Defenders, because it can take you down, but still take a long fight because it's ridiculous shield regen.

when being a bastion, avoid dense asteroid fields, because even Odyssey team mates can knock you in to asteroids, and avoid bases if you have an odyssey friend, because they can troll you by ramming you in to base modules, especially corner modules, while you can't fight back.

sarcasm: Bastion's high shields, along with its extreme agility (one of the best in the game) make it an ideal candidate for beating Invasion as even two bastions can shred every single alien quickly. Its turn rate rivals that of the FuryStar and its shields are undefeated even by the Aries.