Bat-Defender is a Tier 5 ship in Starblast.io. It is a tier 5 version of the Crusader, has the highest shield capacity of any Tier 5 ship, and fires 2 side converging lasers from the front. The main potential of the ship lies in ramming and being an extremely good mining ship, with the lasers only being a moderate help. It is also the heaviest of all the Tier 5 ships, which helps it ram well. 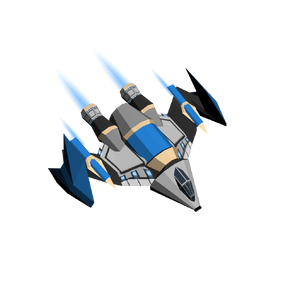 The Bat-Defender has the highest shields of any Tier 5, and as a result, is a very effective rammer. It can mine extremely quickly and can also stand on its own against enemy vessels, without even needing upgrades. It is, however, recommended to max Shield Regeneration to make it a near-invulnerable mining machine. When fully upgraded, it can stand toe-to-toe with most ships in the game, but this is not recommended for it can upgrade into the O-Defender very quickly, a far more effective ship for combat.

The converging lasers help weaken enemy vessels before charging and ramming, which can work well against smaller ships like the Pulse-Fighter.

Due to the update that made asteroid density higher, the Bat-Defender, Crusader and O-Defender chain has received an indirect buff, as they excel in situations where asteroids can be used to punish enemy ships. Bat defender is incredibly dangerous in team mode, as it is fast to reach and upgrade, and given that the player likely has some stored credits from the Crusader and Y-Defender tiers, will be able to buy full attack pods. Despite the recent nerf to Attack Pods, the Bat-Defender will win almost any 1v1 against another tier 5, and can plow through teams of tier 4's and unupgraded tier 5's. Take caution against level 6 ships, but a podded bat Defender can often use brute force to kill tier 6 ships. An upgraded bat defender is even capable of killing a skilled U-Sniper, given some asteroids are around. It is fast enough to chase and kill the U-Sniper, and has enough mass and firepower to spiral it out of control, making the two ships surprisingly even matched, given equal skill. A maxed Bat-Defender can serve as a surprising counter to ships such as A-Speedster and Marauder, as it has enough speed and firepower to attack and harm these ships, and enough mass to overpower them, given the fight takes place in a location with a decent amount of asteroids.

The prefix "Bat-" might be due to its wing configuration, which resembles a bat's wings.