A big, awesome space machine gun. Great for crowd control, decent at combat. Overall quite reasonable, though nothing too exciting.

The ship features two modes, correlated to two possible states of it's main, giant weapon: spinning and, well, not spinning.

While the guns are stationary, their reload is slower, but they fire in-sync, turning this ship into a decent shotgun fighter. Such shotgunning action is devastating close-range, but obviously isn't too great at longer ranges. 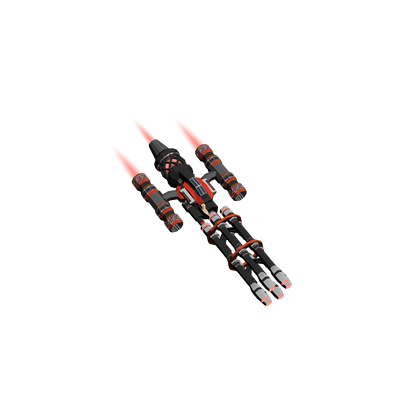 Spinning up the weapon turns this ship into a bullet-spraying sentry. Reactors are kicked into overdrive, making this ship one of, if not the highest-DPS ship out of all Prototypes. Shots are numerous and hurt a lot. However, the gyroscopic effect of such a giant spinning piece of metal works against your steering, making this ship much less useful in 1v1 combat.