The Catfish is a Tier 5 ship in the Nautic Series mod. It has many pairs of cannons at the front which all simultaneously shoot low damage lasers. The lasers vary in speed, most faster than the U-Pulsar but all slower than the Shadow X-27. This makes the ship good at stunning enemy ships and mining. Like the U-series miner branch, firepower is maximized with max damage upgrades (99 DPS), which can one or two-shot most asteroids.

Energy should not be upgraded. The lasers use 198 energy and cannot shoot more often than once per 2 seconds, but min energy cap is 225 and min energy regen is 240 per 2 seconds. 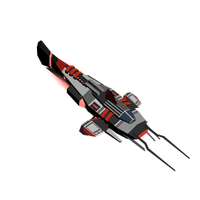