The chat refers to the mechanism currently in place that acts as the only available means of communicating with other players in Starblast. There are 16 different chat options that are automatically bound to a specific set of hotkeys to enable quick and effective communication withing the game. To say something via the chat, the player must either press the corresponding key, or manually click the intended chat icon, if the "Button Clicks Disabled" option is not on. Upon activating a chat option, a small chat box will appear above the player's ship for a short period before disappearing. If multiple chat options are activated in succession, the chat box will expand to show the most recent activations, up to a maximum of four. The chat box can be reset by re-opening the chat (press C twice), or by activating a chat option when four are currently shown.

Due to this mechanic and limitation, to effectively communicate with other players via the chat system, the player must be able to concisely string together phrases consisting of 2-4 words to convey meaning to either friends or foes. The available chat options differ from game mode to game mode, with the chat system lacking a presence entirely in both Battle Royale and Deathmatch to prevent players from teaming with one and other. The chat options made available to the players have been selected for each match based on the tasks that would need to be communicated or information that would be pertinent to share. They vary from Mine (asteroids) to Leader (the person at the top of the leaderboard).

In the lore, the chat is in Universal Galactic Language. 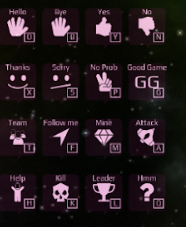 Most of the chat options available in survival mode are centered around the communication teams/groups of players would generally be engaging in. It should be noted that survival mode is currently the only game mode that lacks chat options for You or Me which can sometimes make communicating/delegating tasks to different players difficult. As there is no chat option available that means upgrade most players use the GG chat option as a substitute. Note the icons have been changed in a recent update to look better but there are no new chat options in survival. 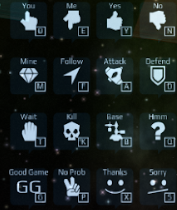 Nearly all of the chat options available in team mode focus on the delegating tasks to different team members or coordinating maneuvers/attacks as a large group or team. It should be noted that there is no Team chat option, which sometimes prevents larger groups from coordinating at once. This option is likely missing to prevent players from using this option on opponents and cross-teaming. Same as survival the chat icons have changed in a recent update but still mean the same thing.

NOTE: Any message that contains "Thanks" will not render for players from enemy teams. This was a mechanic added due to a handful of players spamming "Thanks" after killing an enemy player, which was denounced by many players as incredibly toxic. This also means that "team chat" can be done by prefixing the message with "Thanks". It's also possible to use "Thanks" as a separator, putting the stuff (max 2 emotes) you want the enemy to see before it and team-only after, but it's easier to prefix the message. For example, N + A + X + D will show N + A to enemies and N + A + X + D to teammates. But it's simpler to say public chat directly and say X + A + B to tell teammates to attack the base without letting the enemy see. 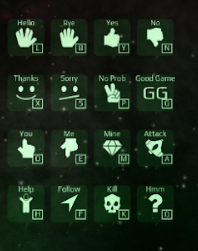 The invasion chat options are mostly general purpose messages which excel in conveying extremely broad messages to one and other. It does currently lack many chat options that would seem necessary such as Boss or Retreat, but many of these meanings have been adopted by other meaning such as GG and No respectively. The shared icons here and the other modes have changed to look better but still mean the same thing.