This ship's main purpose is to ram, with its high recoil and it can do 100 damage to the enemy with its front lasers and then knockback the enemy far away. The Colossal Squid is also helpful if a base raid fails because it can push slow enemy ships like the Fin Whale and Cachalot away from the fight. The Colossal Squid can even send a Cachalot teammate flying at the enemy, doing very high damage.

Holding down the the fire button results in a stream of pulses with no recoil (similar to the U-Spread, U-Center, U-Octa, or U-Perimeter when damage is maxed and energy regen isn't upgraded), mining faster than all other Tier 7 ships. With 6 mining pods, the Colossal Squid does 235 DPS for mining, almost as high as the U-Spread and U-Center's frontal pulse.

Its turning rate is not so good, so it can be dealt TONS of damage while you're turning to hit your opponent. If you have a healer, it will help a lot, so try to give gems to max out the healers so they can heal you better and want to heal you. 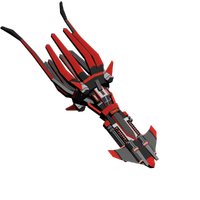