Condor is a Tier 6 ship in Starblast.io. It fires one frontal pulse with moderate damage and knockback as well as two frontal lasers. It has a high rate of fire, which allows it to quickly attack while moving, and is the third-fastest Tier 6 ship, after the Marauder. When properly used, the Condor is an incredible ship that can take down most other vanilla ships (This does not apply to scorpion and advance fighter specifically). 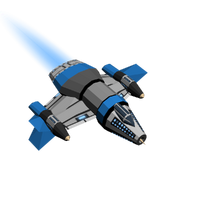 Upgrading the Energy Regeneration, Shield Capacity, and Agility first is vital. The Condor has very steep upgrades, initially very weak, but once fully upgraded, very strong. Players new to Condor should avoid dense asteroid fields, to avoid too many collisions due to weak agility. To get to the Condor, going through the Aetos (a vulnerable ship, but great when used correctly) or T-Warrior (a ship that can stand its ground) is necessary. As a result, by the time a Condor is reached, other Tier 6 ships such as the Scorpion could very well be fully upgraded in Survival Mode. (Condors are more common because the T-warrior is a great ship, and the Aetos is also decent). This is one of 2 other level 6 to be proven to kill every level 7 that we have right now. As long as you don't go in front of the ship (best practice in killing level 7s is the same strategy as the A-speedster).

It could be useful to avoid upgrading damage to get as many shots in as possible. (That also created a strange bullet pulse hose thing) However, one must be skilled with the aim and timing to be lethal with the Condor. Get in as close to the enemy as possible and keep shooting, while taking care not to ram, since the Condor is not a ship meant for ramming. In case of looming defeat, the Condor's good acceleration and speed will allow quick retreat. (unless the opponent is a A-speedster) A good strategy is to time the shots so that you fire one, wait around a second, fire another, wait, then repeat. If you are skilled at this, you get in almost constant pulses (to do this you can get away with maxing damage without capacity to make this easier to do), doing massive damage and throwing ships(especially less massive ones) off-target. In Deathmatch, the Condor proves to be a very good kill-stealer, while also being a good competitor in many matches.

In ACW (When not using a modded ship tree) this is one of the 3 best ships to get (this one for the fast mining and tier seven killing abilities).