The Crab is a Tier 2 ship in the Nautic Series mod. It rapidly fires two low damage lasers from the front. The movement method of this ship was changed many times. In earlier versions the engines were moved to one side so that the ship could only move sideways, to mimic how real life crabs move. After strafing was introduced, it was added to the mod and the engines were brought back to the back. Strafing was removed recently but the engines remain at the back of the ship. 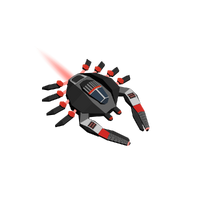