The Cthulhu is a Tier 6 ship in the Alien Intrusion mod. Just like other ships in its upgrade path, it has high shields and high mass. It fires a high damage frontal pulse rapidly. It is somewhat similar to the U-Octa with max damage and no energy regen upgrades, but without recoil. A fully upgraded Cthulhu can take out a Yellow Saucer completely on its own, and can easily destroy most slow ships with low bullet speed and mass quite easily. 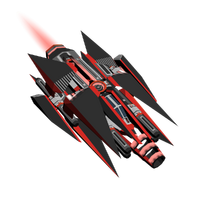 This ship is highly effective at taking out slow targets, even with high health. Its high shield can counter a single opponent. A Cthulhu can decimate most ships in Alien Intrusion using its burst of high damage pulses. Though, its cannons are surprisingly ineffective against ships in the Light-Fight branch, which can dodge the Cthulhu's slow lasers, and then attack when the Cthulhu is recharging. Fast and agile ships prove an annoying and deadly threat to this ship, even with maximum bullet speed. Also, because of its fairly low turning rate and speed, being swarmed by enemy ships is a formidable hazard when attacking alone.