The Cuttlefish is a Tier 4 ship in the Nautic Series mod. Like other ships in its upgrade path, it has high mass and its method of damaging enemy ships is to ram them. However, unlike other rammers, the Cuttlefish uses its high speed to ram rather than a dash. 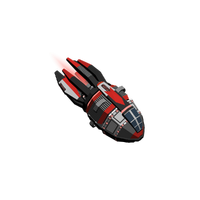 While in the ship code it has a very weak dash (to prevent teammate trolling), the ship's energy capacity is too low to use the dash.

This can be used as a fast miner, and it mines even faster than the Barracuda. When mining, your shield will be depleted very fast, but with full shield, you can mine at least 120 gems (1/3 to 1/2 cargo). When exiting the depot, you are temporarily invincible. After it wears off, you can either use your shield and gem pool to continue mining (and pick up gems that fall out), or you can re-enter the depot and repeat. This ship can fill up its gem cargo extremely fast when mining, and with its high health and speed, it can easily fit gaps in the enemy base with heavy mines and be able to escape, even with the entire team shooting and blocking you. If your shield is empty and cargo is full, you can regenerate almost all shield while you unload the entire cargo into your station.

This ship is already OP can upgrade to other OP ships: Giant Squid, Narwhal, Orca, Octopus, Colossal Squid, which are excellent miners and attackers.