Delta-Fighter is a Tier 2 ship in Starblast.io which fires three diverging lasers from the nose of the ship. Due to this spread, the Delta-Fighter is much more effective in close-quarters combat. 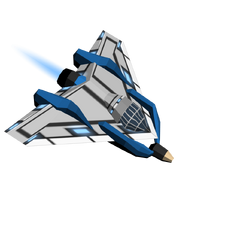 While unupgraded, the Delta-Fighter is a relatively weak ship with exceptionally low shields and mass. It has moderate damage output and thus can be used as a combat vessel in a pinch. It is best to upgrade only energy regen and then upgrade to Tier 3, although many players don't bother upgrading and just go directly to Tier 3. While initially slow, a fully upgraded Delta-Fighter is relatively quick and agile. This agility advantage paired with a sneak attack can allow the Delta-Fighter to kill an upgraded tier 3 ship if used adeptly.

Compared to its tier 2 counterpart, the Trident, the Delta-Fighter is faster and more agile, though the shields and shield regeneration are much lower. However, due to its close-range burst damage, Delta-Fighter would generally win in a duel. The energy regen and agility also allow the Delta-Fighter to perform relatively well as a source of supplemental damage to a larger ship. In addition, the burst damage of the Delta-Fighter allows a skilled Delta player to act as a healer in the early game, although it is heavily outclassed by the side-fighter.

Unlike the Trident, the Delta-Fighter becomes a somewhat formidable ship when paired with secondaries such as attack or defense pods, since its burst damage and high agility allow it to perform hit-and-run attacks in similar fashion to the Fly. Similarly, the Delta-Fighter benefits from the use of missiles and rockets; a skilled Delta player with these secondaries would be able to beat most ships with the exception of the endgame tier 7 ships. It can also be considered a tier 2 version of the T-Warrior.