The Delta Speedster is a Tier 5 ship in the Alien Intrusion mod which replaced the Squid in the 5.0 update. It fires two slow pulses from the sides and a stream from the middle. As suggested by the name, the Delta Speedster is one of the fastest ships in its tier. The player can use the speed to get up close to an enemy ship and fire the pulses, as they will likely not hit if fired from far away. However, this ship can be easily destroyed by the Photon, which is even faster than it. 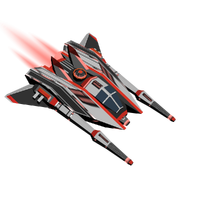