Better stats (mass and shield mainly) than the the Bat-Defender. It has an additional 2 Pulsar guns with a slight inward angle, along with returning double lasers, both also angled. Overall, the Draconite does well at gem control and mining, with its lacking DPS somewhat made up for its high mass, which is key to keeping opponents at a distance. To mine as quickly as possible, the first thing to upgrade is shield regen, followed by energy regen and then speed. Its large hitbox makes it easy to accumulate asteroid damage, however, since it is much wider than it is long, when recovering, it is best to keep RCS off and rotate to navigate between asteroids to regen as quickly as possible. Additionally, the Draconite's wings can be used to snag, albeit, rarely. Combos well with heavy mines. Does not do as well at close range and in the open. 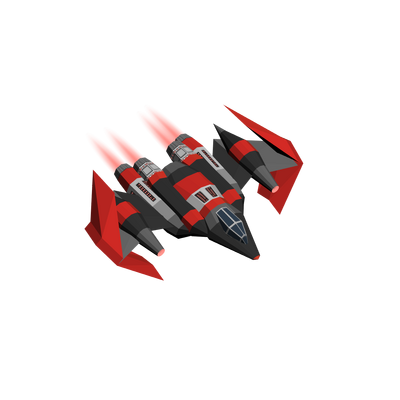