Fly is a Tier 1 ship in Starblast.io. The Fly is currently the only Tier 1 ship in the Vanilla game modes, and thus is the only starting ship. In addition, the Fly is seen in the Multi-Class Ship Tree as the Tier 1 for the Fighter Class, and a variation of the Fly, the Fly V2, is seen in Alien Intrusion as the starting ship. In Vanilla, it is incredibly fast and is one of the most agile ships, only being surpassed by the Shadow X-1 in speed, and the FuryStar in agility. It has a single cannon that fires a relatively rapid but weak shot from the center of the ship. 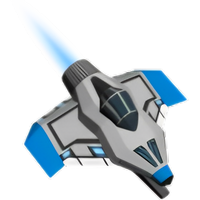 Sharing the game link on social media or buying an Elite Commander Pass allows you to start each match with a fully upgraded Fly, rather than the completely un-upgraded fly (hitting the Twitter or Facebook button on the website before you join a game it does the thing as buying a ECP). This provides quite a large advantage in the early game, as it makes it faster and easier to upgrade or to be competent in fighting. Since it is the starting ship, and cannot be downgraded, it has an infinite number of lives as long as the Survival Mode has not been engaged. To prevent this from being exploited, after each death the Fly will lose all its upgrades. In team mode the fly has four lives to prevent endless running and making the attacking team have to destroy the base. Unlike other ships, downgrading as the fly will remove the player from the game. Once all four lives have been depleted, the player is shown the "game over" message and must leave the game.

Due to the small size and high maneuverability, the Fly is incredibly difficult to kill, especially when facing off against ships with large pulses such as the Shadow X-3 or Advanced-Fighter. However, the small shield capacity means that most high tier ships will be able to kill the Fly with one or two shots.

Since the Fly is only a tier 1 ship, it only has the ability to hold a single secondary weapon. This severely reduces the effectiveness of attack pods, as the DPS gained from one attack pod is negligible against ships from higher tiers. In addition, the Fly's high agility prevents attack pods from landing their shots, especially against ships with smaller hitboxes such as the Side-Fighter or A-Speedster. Rockets and missiles are both relatively effective when used by a fly, though selling the required 100 or 250 gems would take 5 and 12.5 separate trips respectively, as they cannot be picked up from other players, but it is possible to downgrade and use credits. A Fly almost always has no secondary, but it sometimes will have a pod picked up from an enemy player, and it rarely has mines or rockets from downgrading.

It is possible to use the Fly similar to the Shadow X-1 as a hit-and-run ship to prevent enemies from properly mining by constantly attacking them, although the Shadow X-1 can hold more gems and secondaries, and it has a better sight range too. Watch out for the Shadow X-2 and Shadow X-3 because even though you can outrun them, they can keep up for long enough to kill you. All other ships are either too slow or too weak (Tier 2) to be a threat when you run away.

Don't underestimate the Fly though, as it can kill many un-upgraded ships of higher tiers in a duel when piloted properly, even some un-upgraded Tier 6 ships whose pilots are incompetent (they just run away because a Fly made their shield go to 0, they have little to no gems, and they can't hit the Fly because of its agility), but the most incompetent Tier 7 ships will easily kill a Fly if they are barely trying. It is also impossible for a Fly to kill a Tier 7 ship, because of the high shield regen, but two Flys potentially could. The rather accurate damage and the difficulty to hit also makes this ship perform very well in team situations. A group of three fully upgraded Flies can strip the shields off a larger target in a matter of seconds and will usually be able to avoid the majority of incoming damage by constantly changing directions. A swarm of 7 Flies is more powerful than a Bastion, and a swarm of 10 flies is as powerful as an Odyssey.

A better version of this ship is the starting ship in Alien Intrusion. It does more damage and has more energy, but its other stats are the same.