The Giant Squid is a Tier 5 ship in the Nautic Series mod. It is a very fast ship that shoots two high damage pulses from the front and a stream of low damage lasers. When holding down fire, the ship will also dash. However, its dash is very slow other than the burst speed, but it is useful for ramming enemies into asteroids to damage them, during combat to stun them, or when they are low on shield to finish them.

This is an extremely powerful ship capable of destroying a group of other Tier 5 ships even with low shields itself. It's also effective at killing Tier 6 and Tier 7 ships in a 1v1.

This ship is also a great miner when holding down the fire button because although it is slow, its high Energy Regen makes a potentially fast miner. 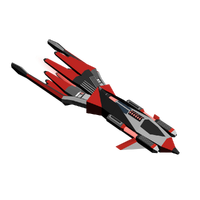