The Harpy is a Tier 6 ship in the Alien Intrusion mod. In addition to being very fast and agile, it is capable of dealing a lot of damage. Because of its high energy capacity and burst damage, the Harpy is a great hit and run ship.

It is somewhat similar to the Phoenix, but it sacrifices general stats for better speed, mass, and burst DPS. 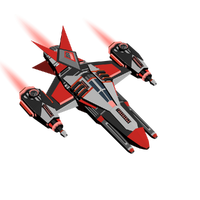