The Hellfire is a tier 6 ship in the U-Series mod. It can be considered the U-series version of the O-Defender, but has wayyy more firepower than that.

This ship is known for its very high fire rate and stunning abilities! One stream of attacks from this thing can leave an opponent defenseless! When maxed, it can destroy pretty much anything, including Tier 7 ships). But it does have some drawbacks such as its slow speed. But, if any ship gets cornered, they'll probably be shredded. The amount of bullets this ship fires drains enemy shield like nothing you've ever seen before. Prior to new updates in Modding, this ship had 100x more ROF than it had before, though this resulted in extreme server lag. In the end, it was given less ROF but more damage. This ship would be very good under the right hands! From seeing the image of how it shoots, one shot is similar to a U-Pulsar shot, but smaller. Now imagine that multiplied by 30 with maxed damage, easily placing a ship in stunlock, which disables control over the ship.

If you are attacked by a ship like the U-Smasher or see it heading towards you in the radar, start shooting into its direction. This way you'll surprise him with bullet hell and backfire the attack! It works because of the high bullet speed, and with the slight knockback you get, as it gets closer to you, shoot slightly into the opposite direction to dodge the ram attack but still shoot at him with your other cannon since there's a big gap between them. But be careful near dense asteroid fields, since a U-Smasher can still kill you by ramming you into asteroids. 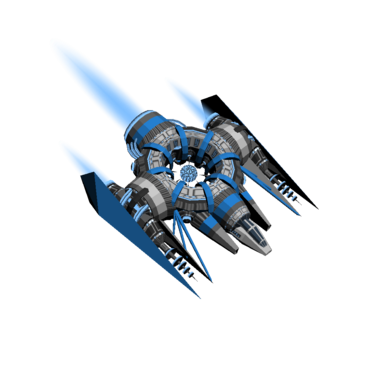