The Howler is the newest ship in the vanilla ship tree. It is a Tier 5, on the right side of the tree. It replaced the Toscain on 1/28/2020. It is also a little bit like a mini-Marauder.

This is the official description from the creator; Malefic Artist: "Fighter-heavy hybrid with 3 round burst firing, split into single shot when empty." 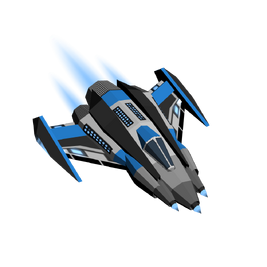 This ship is a pretty strong vessel, capable of taking down unskilled Tier 7 ships if you use this ship with skill, with a significant speed of operation similar to the old ship. It has three frontal pulses with many shots following them. With its fast speed, the ship can move through the challenges and quickly defeat the enemy. This ship is also a very good miner so this ship works well for team mode as well as survival.

The pulse of the ship has a similarity to the FuryStar, but the Howler is slightly more powerful.

The decent ship is capable of killing some maxed ships when it is not even upgraded, and when maxed will usually win duels against every other level 5 ship. However, you have to make sure that the first three frontal pulses hit them or your chances of killing tier 6 and 7 are considerebly 45%. It is weak against being teamed against, and Tier 6 ships, although even A-speedsters have to be careful about this powerhouse.

With 5 attack pods, this ship does 100 DPS, just like the Bastion. It just needs a maxed Pulse-Fighter healer (a Fly was enough before healing ratio was reduced to 50%) to have the shield regen of a Bastion.

The ship is best with attack pods in base raids in team mode. It is also a great miner.