LSV OnMyPosition - an efficient, long-range scout with an impressive amount of cargo capacity and even more fuel, which resorts to calling in LRA strikes when in-combat.

Prototypes project was going to get a scout vehicle of its own sooner or later, and in Jan 4339, it did happen. Sadly, scout vehicles are, by definition, not designed for combat, which prevented this ship from participating in Prototypes combat tests initially.

Meanwhile, some other engineers were working on a heavy AI LRA drone, featuring a state-of-the-art cloaking system. Cloaking worked well, extremely well, in fact - and that led to an obvious problem. If nobody can see you, and if everybody is trying to hide as well, you can't really see anybody, either.

Basically, without shining a space flashlight, properly aiming the drone was out of the question - and shining said flashlight would've made cloaking pointless.

At some point the two groups met and realized: what if we attached engines and a cockpit to the flashlight, and made it shine back at our LRA drone? Of course, that still compromises the cloaking somewhat, but not nearly to the extent of the naive approach. 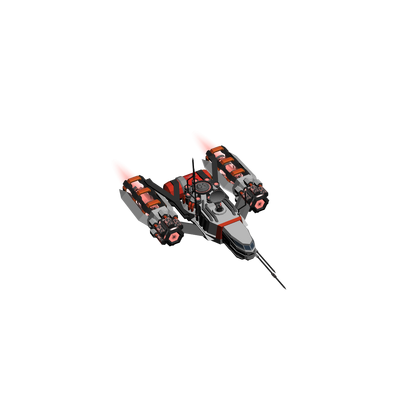 And so, OnMyPosition gained a purpose on the battlefield. It can still be used as a scout - it is designed for that task - and it isn't the only scout, hell, not even the only fighter capable of guiding the LRA drone - but it is the best suited one for this task. So far.