Marauder is a Tier 6 ship in Starblast.io that replaced the H-Mercury. It sacrifices a frontal pulse for a rapidly firing central laser and two side lasers. The Marauder is capable of dealing a lot of damage in a short period of time, given it has energy saved up, making it best used as a burst damage ship. Its low mass, low energy capacity and low energy regen are the biggest weaknesses of this ship. (but energy regens somewhat quickly due to the low capacity) However, this is made up for by the ship's high speed, high shield regen, and agility. This is the second fastest tier 6 behind the A-Speedster in terms of speed. 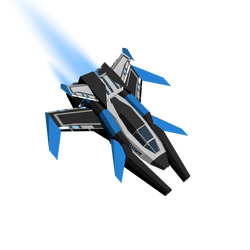 You can easily counter the Marauder in two different ways. The A-Speedster and Condor with RCS off are capable of dodging most of the shots from the Marauder while being able to snipe it with their main pulses. Other ships like the Advanced Fighter and Scorpion can take it down as long as the main pulse hits. Groups of Marauders, just like groups of any fast ship are very dangerous and caution should be taken to avoid being killed. By dodging shots and circling, the Marauder is capable of taking down Tier 7s. Attack pods are extremely powerful on the Marauder because the marauder already has a large amount of DPS. Defense pods help by allowing the marauder take less damage (as long as the pod gets hit).

When playing as the Marauder try to get six Attack Pods to maximize your damage to your opponent. Never fire when you have low energy as you will do low damage, unless your opponent is low on shields and/or is easily killed. Always save up your energy so you can deal as much damage as possible. A good tactic is to dodge and fire at your opponent until you have low energy, run away, then come back when you have full energy and repeat. This tactic does not work well on A-Speedsters, however, as they are capable of chasing you down with their superior speed and agility. When you are being chased by ships such as the A-Speedster or Condor, your best bet would be to turn off RCS and shoot back at them and hopefully fend them off. This works better against Condors as you are slightly faster than them. Against slower ships, hover around them and tear their HP down until your shield is down, then flee. When you use light ships like the Marauder have a bit of gem capacity to make easy escapes.