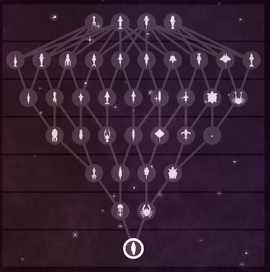 The Nautic Series mod, by Goldman (creator of Alien Intrusion) is team mode with a different ship tree, mostly aquatic creatures. There are a few ships like fish, are named after fish, and “fly” like fish. There are a significant amount of ramming ships in this mod.

Nautic Series is a Team Mode based mod:

Strafe (Outdated) - This is a new mechanic that uses the arrow keys A and D to move from left to right. There many strategies that can be used with this mechanic such as they fly in circles mechanic where you can fly in circles around the opponent by holding A or D and aiming at the opponent. Or you can spam A and D so you can dodge enemy fire! There are many more strategies implemented with strafe and is a very good strat to use and a good mechanic!

Healing Lasers- This is a new mechanic added to team mode that changed the way many people played the game! This update made more people think more tactically. This update leads to many players helping teammates by healing them. To heal you need to go to the station depot and click on the option where it says "Healing" when this is done your lasers turn into much more of a fun and laser which shows "+" when you heal a player. The amount the player gets healed by is determined by your ship and its stats. The game mechanic allows players to act more as a group and stops the problem with people flying solo and killing the whole team. Healing gives points in team mode thanks to the October 2019 update. Also the best healer is recognized in a team. The best miner and the best killer will also be recognized.

There are 37 ships in Nautic Series, according to the scheme of 1-2-4-7-9-10-4. A unique characteristic of most ships in this mod is that they are very long compared to their width, making them difficult to hit while directly charging at an enemy ship but easy to hit from the sides. There are also many ships that use back-firing lasers to propel themselves forward at fast speeds.