Niteracer is a pretty basic, decent pulse fighter with mediocre agility. It is a transformer, though, which makes it slightly more appealing.

Its transformer label comes from its ability to deploy/retract its wings, simultaneously rerouting power to shield or weapons.

While wings are retracted, this ship is mostly configured for chasing/retreating. Reactor power is redirected to shields, and due to a shorter arm, engines are less efficient at turning the ship. This form is also superior in-atmosphere, but these days, fighters rarely engage in atmospheric battles. 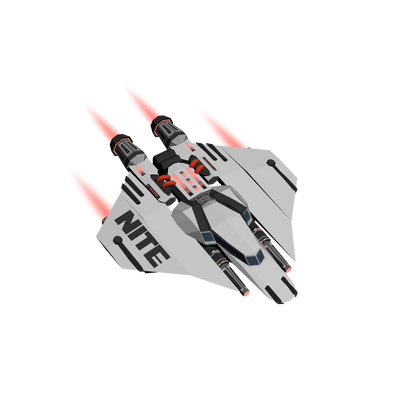 Deploying wings configures this ship for combat. DPS is greatly increased, at the cost of shield regen and acceleration. Longer arms boost engine efficiency for rotating the ship.