O-Defender is a Tier 6 ship in Starblast.io. It has the highest shield capacity and regen among Tier 6's and fires one frontal pulse that does moderate damage and knockback. It is also almost immune to knockback with its high mass and is the slowest Tier 6. It is essentially a Tier 6 mixture of the Y-Defender and Bat-Defender. 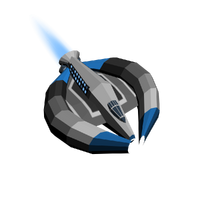 The O-Defender's strongest point is its ability to mine asteroids effortlessly by ramming, with its incredible shield capacity and regeneration, which makes it extremely difficult to destroy on 1v1. It is a decent ship un-upgraded, but upgrades very quickly due to its mining abilities. Recommendations are to upgrade Energy Regeneration first, then Shield Regeneration and Capacity. Once it has a full crystal cargo, it is even more difficult to destroy, mostly due to the very little knockback it suffers. However, other ships are still able to fare well against it.

The weakest point of the O-Defender is its extremely low agility and slow speed. As a result, it fares disastrously against multiple opponents, especially if they're fast, quick ships such as the Shadow X-2 or the Condor. Its large size also makes it very easy to hit. In Team Mode, O-Defenders can serve as good front-line ships, tanking damage while allowing hard-hitters such as the Advanced-Fighter to fire from behind. Every shot matters, with low energy cap and regen, so be accurate, or you will be bitten down repeatedly. Use asteroids for cover.

In Deathmatch, the O-Defender is a tricky choice, because of its slow speed. Unless the other ship is known to be weak against it, it is not recommended to choose it.

With 6 attack pods, the O-Defender becomes a high-shield high-firepower ship! That makes it devastating, although enemies can hit-and-run or shoot from a distance to counter the attack pods.

you can take down 2 skilled A-Speedsters. if you're so so skilled.

also, if you're skilled, you can take down an entire non-gemmed Bastion.

but if the bastion has gems and is skilled, it can take down you before you take it down, or if there is a healer or a Shadow X-3 teammate helping it,

you shoud be fast and try to drive it in astroids because it is big, has low shield cap, and has low mass, so you can easily bump it in to astriod and best in to DENSE because it will be tricky to get out with it's size and shield cap with low mass, while it's X3 friend will be slowed by the astroids.

it's shot DOES NOT have recoil even it is big and have quite high damage.

Its shield can survive two pulses from an Odyssey without having any gems!

and it is the best ship if you want to upgrade to the Aries.

The O-defender is in a circular shape, clearly in reference to its name.