The Octopus is a Tier 6 ship in the Nautic Series mod. It fires a large number of low damage lasers at once from the front. Similar to the U-Pulsar, the lasers have recoil, and while highly damaging, the lasers move slowly and can be dodged. This ship and the Manta can be thought of as the Nautic version of the O-Defender, but this ship is slightly faster and has recoil.

While slow and heavy (good for mining) compared to other light T6s, its recoil allows it to move somewhat quickly with RCS off. It is heavier than the Orca, so ramming at extremely close range and in a dense asteroid field is viable. 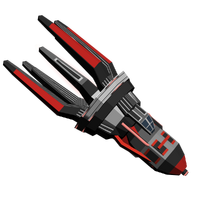 It is also a fast miner, which is good for getting to Tier 7. If you are solo, it mines faster than the Orca, but if you have a healer, the Narwhal or Orca can mine faster, and are better for an attacker/healer duo.

This ship upgrades to the Colossal Squid, which is the best ship in this mod.