Odyssey is a Tier 7 ship in Starblast.io. It has the second-highest shield capacity and the second-slowest ship speed in the game, both after the Aries. It fires one gigantic frontal pulse that is extremely slow and does immense damage being the highest laser damage in vanilla currently. It can take out the most well-protected ships, while dealing immense knockback. It has high recoil, allowing it to move backwards while firing with RCS off. It fires two lasers forward and two lasers backward from its sides that do moderate damage, but they are generally useless, except against Flies. 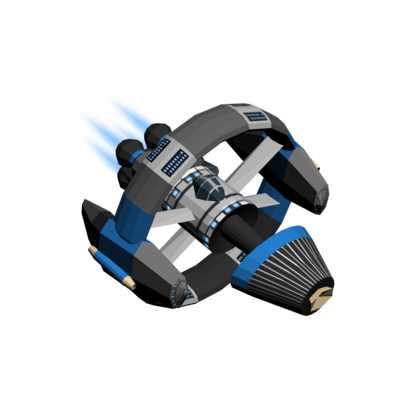 As a Tier 7 ship, it immediately triggers the Survival period in Survival Mode upon reach. Also, as a Tier 7, it cannot upgrade and has zero lives, in both Survival and Team Mode.

The Odyssey has an extremely low speed, turn rate, and speed. However, it makes up for this by having sheer immense firepower, incredible shields, and exceptionally high energy regeneration. It is immediately recommended to mine through asteroids by ramming to fill up the crystal cargo, making it far more powerful. When encountering enemy vessels, take aim carefully, predict movements and ensure it hits. Never use the side-cannons, and always wait for the main pulse to recharge. Aim shots to make the target collide with an asteroid immediately because of the knockback after a hit. The efficient use of the Odyssey requires every movement to be made for good reason. A good thing to note as Odyssey is that part of laser speed is transferred from your ship's current velocity in the direction you're shooting, so if you're about to fire a laser move towards the target briefly. With enough skill, you can use RCS to actually fire a slanted laser that is incredibly difficult to dodge even for smaller ships if you fire it towards them.

The Odyssey is particularly weak against multiple small ships, such as the A-Speedster or Condor though still requiring a very long fight to be taken down. It is also weak against recoil-powered ships such as the U-Sniper, with RCS. To beat an Odyssey, it is always necessary to maintain enough distance to retreat from shots or to navigate around using RCS. A single shot is enough to send a low-mass ship cycling through the abyss, so it is vital to not be hit, while never losing momentum and continuing to hit the Odyssey. It also helps if you have a Barracuda on your side to knock the Odyssey around and make it easier on the smaller ship to take the Odyssey down because it can't aim as easily. At the peak of skill using an odyssey, and perhaps in a large enough asteroid field, the odyssey can beat even the most skilled players one on one. This is because, when properly used, the Odyssey will not receive enough damage to get knocked back once it's on gems, and can simply sit in its gem pool. Any attempt by its opponent to take the gems puts them into point-blank range of the death laser. A U-Sniper can hammer away at such an Odyssey for as long as it wants, but as long as they pick up all dropped gems, the Odyssey takes no damage. However, in a sparse asteroid field or empty space, or operated by an unskilled player, an Odyssey will pick up gems too slowly and eventually lose to a U-Sniper in a 1v1, even if the Odyssey starts with full gems and the U-Sniper has no gems.