Pioneer is a Tier 4 ship in Starblast.io. It fires two lasers from the front at a slightly slow speed that does moderate damage. 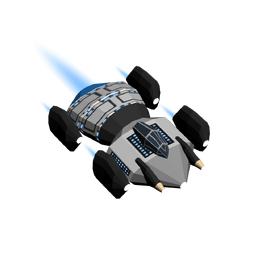 The Pioneer when un-upgraded is an awful ship that will lose any fight. However, once upgraded, it can be considered the strongest Tier 4 ship in the game. Its stats scale steeply per each upgrade (except Energy Regeneration). It is generally recommended to upgrade Shield Regeneration first before proceeding to upgrade other statistics. A fully upgraded pioneer can decimate many ships in an equal battle and can also flee with its impressive speed. Against teams, it can perform admirably.

It is not a very large ship but is quite bulky, similar to the X-Warrior, but much faster. It has relatively low acceleration and is best known for its sudden attacks ramming into enemy vessels. Remember that despite it having the highest terminal velocity of any Tier 4, the Pioneer can still be chased down and killed by other fast tier 4s, especially the Side-Interceptor, or fast ships in other tiers. Despite this, Pioneer is simply amazing against any ship with a lower mass than itself.

"The pioneer is also considered to be a garbage truck because it looks like one, and it hits like one." - Admiral Forever