The Piranha is a Tier 5 ship in the Nautic Series mod. It has a rapidly firing stream at the front as well as two similar damage lasers that fire much slower. this ship is a great miner as well as an attacker, and although it lacks a huge pulse, it can steadily drain the health out of a opponent ship when used properly.

With its fast ship speed and fire rate, it is like the Shadow X-2 with a bullet hose like the Bastion, at least before it was nerfed.

It is also like the Tier 5 version of Lionfish with slower turn rate. 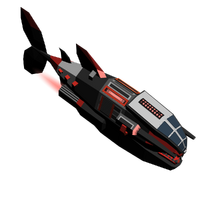