The Reef Shark is a Tier 5 ship in the Nautic Series mod. It is a stronger, Tier 5 version of the Scad Fish. This is due to their nearly identical shot style and purpose; the both shoot a single laser from the front with a very high velocity. The Reef Shark's laser has such insanely fast velocity that it is hard to dodge and deals somewhat high damage. It is also very fast, making this a very powerful killer ship.

This is the second ship of the "killer branch": Scad Fish > Reef Shark > Shark or Grouper Fish. 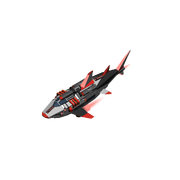