Rock-Tower is a Tier 6 ship in Starblast.io. It fires two tiny frontal lasers extremely rapidly, while simultaneously having great ramming damage. It also features very high shields and good shield regeneration, while using energy supply efficiently. Due to these statistics, it is a force to be reckoned with by slowly eating away its opponents. Its fast mining makes it often go to battle with more gems and secondaries than its opponents 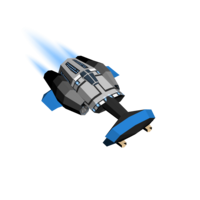 The Rock-Tower is an incredible mining ship, perhaps the fastest miner out of all Tier 6 ships after the O-Defender. It is best to upgrade shield regeneration first, and then ram asteroids while firing. It does best in dense maps filled with asteroids and is noticeably weaker in maps with fewer asteroids because it can do damage by knocking enemies into asteroids. After upgrading shield regeneration, proceed with shield capacity, damage, and energy regeneration.

In Survival Mode, it is a terrific miner and can be used as an upgrade ship to tier 7 or as a fighter and It can somewhat easily take down teams.

In Team Mode, Rock-Towers make great support ships, both for mining the base and for supporting hard-hitters like the Advanced-Fighter in combat. Due to its narrow width, the Rock-Tower can also navigate very well through asteroid fields, and make great harassers against enemy miners, taking them one by one. It is particularly good at delivering consistent knockback after an enemy ship has lost its shields and is on crystals. It becomes even more of a threat with attack pods by quickly sending ships into an uncontrollable state even the O-Defender.

In Deathmatch, the Rock-Tower is a fairly good kill-stealer due to its rapid shots, but its low speed renders it a significant disadvantage against faster ships. It also does not perform well against hard-hitters in Deathmatch.

Enemies can also use RCS against the Rock-Tower, firing while simultaneously retreating, preventing it from ramming. While the Rock-Tower is not completely helpless against this, it also loses its ramming advantage, making the battle more difficult. This ship is also not recommended in PDM because it's most effective when ramming however it is a counter to Barracudas in PDM.

Its firing style is unique, converging shots then straight shots