Shadow X-1 is a Tier 3 ship in Starblast.io. It is an incredibly small ship that has the highest Speed out of all the ships in the game. In terms of agility, this ship has a very high acceleration but a very low turning rate. This ship also has a very slow energy regeneration rate, which means the only viable combative tactic is the hit and run method .Though the ship is at an advantage over some tier 3 or even 4 ships using this strategy, with the highest maxed shield regeneration in the tier with the Y-Defender, higher than a lot of tier 4's. 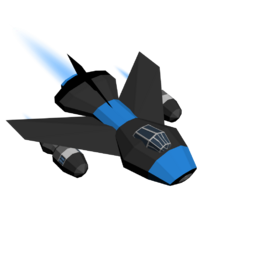 This ship proves most useful in maps with few asteroids to maximize the benefits of its high speed as hitting a single asteroid could send your ship into an uncontrollable state and make you lose significant health. If piloted skillfully and with patience, the Shadow X-1 is capable of slowly picking at the shields of essentially any ship tier 5 or below and will slowly but surely kill them. Good pilots can also navigate through denser asteroid fields without too many crashes. The shield regeneration rate is on par with half of the ships in its tier, which means that, due to the very low shield capacity, the Shadow X-1 can regenerate to full shields relatively quickly. It has a very steep learning curve, and only very skilled players can master it to defeat other ships. An understanding of how to use RCS is extremely helpful and nearly a necessity with this ship. A good X-1 with an understanding of RCS can navigate a dense cluster of ships to escape or pick off a weak target while taking relatively little damage. This is easier now since the agility was buffed on 2018-05-14. Since one wrong turn or bump can quickly turn the tides of a battle while using a Shadow X-1, it is generally recommended to remain near the edge of the screen and fire at the opponent. This allows the player to flee if need be and will usually land most of the damage as the laser velocity of the Shadow X-1 is very high. Caution is recommended when dueling against ships of higher tiers as ships such as the Advanced-Fighter can break the Shadow X-1's shields entirely with one hit, when maxed.

The Shadow X-1 can serve as a very good distraction in Team Mode, utilizing the hit-and-run tactic against enemy teams and preventing them from properly mining by constantly attacking them, especially in dense maps. The Shadow X-1 works very well in combination with defense and attack pods. However, due to the hit and run nature of the ship, this is usually not a sustainable combination, as the pods will usually be destroyed long before three more pods can be afforded. It is therefore better to use rockets and missiles.

The Fly is better for the hit-and-run tactic, as you start with it, but the Shadow X-1 is faster and can see further and hold more gems and secondaries. Also, the Shadow X-1 is the only ship that can outrun a Fly.

To troll in an X-1, or be successful at it, you have to be a “better” player overall. The X-1 upgrades from Trident. Practice with ships such as the pulse fighter and side fighter to get a good grip on the style of fighting. Now, a X-1 is a “Hit and run” ship with horrible regen, but it’s really fast. The flaws of the X-1 are as follows:

1.) Low agility; while quick, the X-1 lacks agility. This makes it hard to get a bead on a target. However, using RCS, you can use your momentum to swing by the target, hitting them the entire time.

2.) Low health; The low health of the X-1 is a major flaw for the little ship. While it has a high shield regen, the capacity is really low. This means it is important to NOT GET HIT BY PULSES, or get stun locked. You will be unable to move while your shields are drained. Always use RCS to escape gunfire

The X-1 is perfect for hit and runs. It-dumps all of its energy out in seconds, making it able to throw everything at the target and escaping at the same time. Knowing the tactics of fighting with this weak ship is a virtue. If you don’t know how to fly the X-1, you will die. There are many different tactics for different types of ships, so I will go over them.

Pulse ship: A ship with pulse shots are bad news for X-1s, as they stun lock the poor little ship. The best way to defeat a pulse ship is to pray you don’t get hit. Another way to defeat them is to do head-on flybys. This means the pulse ship has a narrow margin of error, as your moving so fast. Note: *Do NOT continue to fly at them. You will be rammed and that’s worse.* Fly at them fast (This is all assuming your maxed out), at your judgment, fly off to the side, keeping a bead on them. This is the easiest way for me. Once you are flying away, pray that they don’t shoot you...or dodge fast to the left and right.

Bullet hoses: Bullet hoses are ships that throw out shots fast and at a high rate. Examples of bullet hoses include Side-Fighter, Aetos, H-Mercury (replaced by Marauder), and most fearfully...the Bastion. The easiest way to take on the slow-moving and unagile bullet hoses is by circling behind them and shooting. Note: *Do not bump into them at all costs. You will be stunned, allowing them to turn and shoot at you*. If it’s a quick and agile ship like the Aetos or Side fighter, I recommend you don’t tangle with them. Those are almost the X-1s weakness. I recommend you let them chase you, but swivel around and shoot at them while using RCS. Their bullets will go off to the side of you, but your bullets will fly dead on at them. However, do not attack ships with high shield regen (like the Bastion, and maybe the Marauder) with the Shadow X-1, since their shield regenerates faster than your energy.

What to kill: -Vanguard. The one that shoots two strong quick bullets. Kill it, don’t be afraid. The Vanguard’s weakness is the X-1. Surprising, right? The X-1s bullets will rip the Vanguard apart because the Vanguard is a glass cannon. I recommend moving at a slow arc while using RCS. Don’t attempt to dodge the bullets, they are ineffective against you, and you will take him/her down quicker. REMEMBER: *If you are going to die, abandon the vanguard. It’s not worth it*

(note from another player: do not attack its upgrade, the U-Sniper, as just a few shots will kill you, and its shots move very fast.)

(note from yet another player:you can attempt to smash a u-sniper while shooting at low health if near a dense asteroid field, as your shield regen and acceleration makes ramming more viable.the shadow x-2 is the best same tier matchup against a u sniper, thanks to the u-sniper's wide shot gap and inagility.)

Other X-1’s: Unlike other ships, you can’t outrun another X-1. Be careful, use the tactics already listed. do not ram when enemies are around or low on health and cargo. Try to use the tactic for bullet hoses, run...swivel...shoot. It’ll drive them off (maybe).

Note from another shadow x-1 player: I like maxing the x-1 and stocking up on credits. When I have enough credits, I use them to buy missiles and torpedoes. Then, I zoom around enemy players and shoot missiles and torpedoes at them. Remember: *torpedoes are for big groups or extremely slow and high shield ships (like the Aries).*

Note from yet another shadow x-1 player: The best secondary for an x-1 in team mode is rockets. Get and max an X-1, and when you get full gem cargos from kills turn in gems (Preferably 50, 100 or 150 at a time for smooth rocket costs). With these rockets, you can deal high burst damage to finish off those ships that are just a bit too tough for you otherwise, and loot their gems to turn in for more rockets. Repeating this cycle, I have easily reached 800 spare credits as an X-1 in team mode, so when my team nears a level 4 base I can powermine to A-Speedster using pods. Another factor in this strategy is actually ramming. If you combine the force of the rocket, your small but fast ship and its lasers, and combo an enemy into an asteroid, you can easily deal 150+ damage in a burst attack. Also remember to steal their gems at that point, or this beautiful firepower is wasted. HOWEVER, it is important to know what to ram;

What to ram with the rocket combo: Side-Fighter, Pulse Fighter, Fly, Trident, Delta Fighter, another X-1, Shadow X-2 (If it is close enough to an asteroid to get a nice combo), Aetos (ONLY if they are very low on HP), Side-Interceptor.

What NOT to ram with the rocket combo: Any other ships, BUT I MEAN IT WHEN I SAY THIS, STAY THE HECK AWAY FROM BARRACUDAS!

And that’s it! Have fun with these new tactics, good luck taking down those tanks with your quick and agile ship! As long as you are careful, you should be fine. Remember, if things look dodgy, it’s okay to run.

When upgrading to this, do not upgrade immediately. Contribute as Trident to get 2 mining pods. Once you have 2 mining pods, immediately upgrade to this. Then upgrade energy regen, capacity, shield cap, regen and then the rest of the stats, except damage. Don't upgrade damage yet, as it very slightly decreases mining ability. Get another mining pod and ONLY MINING pods. Keep contributing and mining until you are able to buy rockets and missiles.

Remember, if you choose this ship, you should be using it to frag enemies as a Tier 3 for a large portion of the game, even when the bases are at higher levels. If you want to go Pioneer > Howler, the Y-Defender is a much better path to it. If you want to go Side-Interceptor, Side-Fighter is better because it farms the fastest in T3.

If you're on low on shield, run away! Avoid enemies that want to kill you, teammates that might troll you, bases, and asteroids.