Shadow X-2 is a Tier 5 ship in Starblast.io. It is a Tier 5 version of the Shadow X-1 and X-3, sharing similar characteristics to the X1 more than the X3. It is extremely fast and fires two frontal lasers rapidly, using its energy supply extremely quickly. It is essentially a hit-and-run ship, extremely weak at mining asteroids, but able to harass most enemy vessels and take them down with persistence. 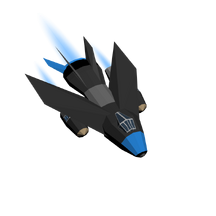 The Shadow X-2 has the second-highest acceleration in the game, behind only the FuryStar and is the fastest in Tier 5. However, it is also the least agile Tier 5 ship and is difficult to steer, requiring a great deal of skill and experience to master. A group of Shadow X-2s can annihilate slower vessels, and it is best to stay far away from these groups. To counter them, a ship like the T-Warrior works admirably. However, a Shadow X-2 is a significant threat by itself, being difficult to hit because of its small size and immense speed. In Team Mode, the X-2 can often be a great help to allies, often being the difference between victory and defeat. If you have attack pods from the previous tier you can take down enemy ships even quicker, but it's recommended that you sell the attack pods to get mining pods, so you can mine faster and then get new attack pods and deal with enemy ships when more effectively. In team mode, this ship in numbers will rip apart higher health ships and bases. This ship is not the best to use in an ACW based game because of the slow mining but it's level 6 upgrades are some of the best ships to use in ACW. (A-speedster and Rock Tower) This ship is also somewhat alright at taking down 3 of the 4 level 7s (Odyssey, Shadow X3, and Aries) because of the small size and really high speed, one should take care and not get hit or your going to take insane knockback and lose most of your health, you should have a teammate in team mode to help or load up on secondaries. It is also somewhat weak to barracuda, as one predicted shot can annihilate an X-2.

When playing as the X-2, it is generally recommended to max Energy Regeneration first. Damage should generally not be upgraded, let alone maxed. Agility is also an essential stat that needs to be upgraded quickly. The X-2 and the Aetos can both proceed to the A-Speedster, the fastest Tier 6 ship, but significantly slower than the X-2 itself. This ship also goes into the Rock-Tower (one of the fastest mining ships in the game) but because of the weak mining skills of the X-2, upgrading to Tier 6 is difficult, but the X-2 is a brilliant ship by itself when fully upgraded. Despite this, in Deathmatch, the X-2 does not work very well.