The Shark is a Tier 6 ship in the Nautic Series mod. It is a stronger, Tier 6 version of the Tier 5 Reef Shark and the Tier 4 Scad Fish. However, instead of firing one laser, it fires a pair of lasers from the front with high recoil, similar to the U-Sniper or U-10 Thunder. Just like its predecessors, the lasers have an insane velocity.

The Shark's lasers have the highest velocity of any lasers in the mod, which make them almost impossible to dodge. However, with high recoil, this ship is like the U-10 Thunder because it can't do too much damage before it quickly moves away from recoil. Despite the lasers' high velocity, the range isn't better than other ships, as the game quickly removes the lasers to compensate.

This is the final ship of the "killer branch": Scad Fish > Reef Shark > Shark or Grouper Fish.

It is very bad if you don't know how to use it, but REALLY really good if you know how. 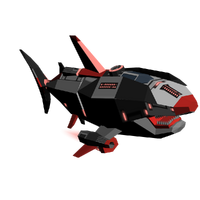