Side-Fighter is a Tier-3 ship in Starblast.io. It rapidly fires a large stream of inaccurate lasers from the nose of the ship. The gun fires at an astounding rate of 10 shots per second, using its energy supply rather quickly. It is a great farming ship and when fully upgraded can take on any tier below or equal to it. This ship is also quite fast, making it a good candidate for a hit-and-run ship. 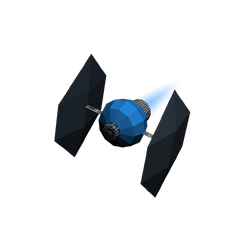 When playing with the side fighter it is recommended to upgrade energy regeneration first. Because it is so good at mining, the Side-Fighter is very good for quickly leveling up the station in Team Mode. When maxed, it can also defend itself relatively well. This ship works very well as a combat ship when paired with the secondaries, specifically the defense pods. Having two or three defense pods will more than make up for the weak, glass cannon nature of the Side-Fighter, making it a deadly threat to higher tier ships. Attack pods help by quickly stripping shields and gems off of enemy ships.

The Side-Fighter is the ideal ship for any players searching for a glass cannon. The rapid firing rate paired with the large energy regeneration is great for quick killing and the ship becomes extremely dangerous when maxed. The inaccuracy of the main gun means that to effectively fight, the pilot must fully commit to an attack and get close to the opponent. A player using a Side-Fighter should exhibit caution when fighting larger ships, such as the X-Warrior. The extremely low mass of the Side-Fighter means that if the player loses all shields, the opponent can easily stun-lock the Side-Fighter. The high speed of this ship can be used advantageously to flee from combat against stronger ships.

The Side-Fighter has rather weak shields and a relatively low mass which, makes it somewhat weak in prolonged duels. The Side-Fighter has the highest amount of energy regeneration of any Tier-3 ship. Due to this, it is an excellent mining ship and very good at fighting other ships especially well when maxed but will usually lose to a maxed Pulse-Fighter or Y-Defender unless piloted extremely well. The ship has above-average speed and a good amount of agility. It also makes a good healer in Team Mode since it has good DPS and is fast, allowing it to have the ship it's healing to tank enemy fire.

The vanilla ship tree is regular except for the Side-Fighter, which upgrades to the X-Warrior and Side-Interceptor. If it were regular, it would upgrade to the Mercury and X-Warrior instead.

The Side-Fighter is one of the ships inspired by the Stars Wars Universe: