Side-Interceptor is a Tier 4 ship in Starblast.io. It fires two lasers from the frontal sides rapidly, using its energy supply steadily. It is an excellent ship for fighting other players when fully upgraded and also farms well. It has excellent firepower and decent speed, making it a formidable opponent for many ships, and can also perform efficient hit-and-run strikes because of its brilliant acceleration and agility. (it's the second most agile level 4 in the game only behind the vanguard) 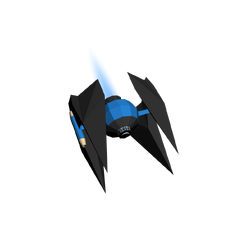 It is generally recommended to upgrade Energy Regeneration first while playing the Side-Interceptor. If you decide to go to the next tier, it is best not to upgrade anything else. However, a fully upgraded Side-Interceptor is a great ship and can be used to combat many other vessels. Its good speed and incredible acceleration allow quick getaways. This also is one of the best level 4s in attack groups in team mode by ripping many ships apart. Especially with full attack pods.

However, you can combine the Side-Interceptor with 2 defense-pods and 2 attack-pods, and receive the ultimate destroyer to almost all Tier-4 and Tier-5 ships. This ship is highly effective with the secondaries. Do note though that it is vulnerable to pulse-type ships; Pulse-Fighter, Y-Defender, U-Sniper and other Pulse-type ships. (Though when this ship is maxed a Pulse-Fighter and Y-Defender is not much of a threat anymore.)

This ship is very powerful in the sense that it can win against ships way above its own weight thanks to the great agility and the use of RCS you can kill heavy opponents like the Aries and Odyssey because it's quite hard-hitting this fast ship! One of the best ships with the ability to attack so elegantly and destroy opponents that shoot slow lasers. This thing can be a real monster if used correctly. Ironically, circling and SIDE-attacking enemies is one of the best ways to take out larger ships, or can even be used against some smaller ships (DO NOT attempt this against an A-Speedster).

NOTE: Never ram using this ship, and if you are dueling one try to ram so it takes high damage due to it's very low mass.

The Side-Interceptor is one of the ships inspired by the Stars Wars Universe: