Space Stations (also called bases in Chat) are present in Team Mode. Each team has a space station that can be upgraded from Level 1 up to Level 4. Upgrading the station unlocks upgrades to higher tier ships, and it increases the size, shield capacity, and shield regen. Generally, a station has twelve modules, randomly arranged. In custom games, this can be changed by increasing the station size, and other specs. AOW has huge stations with many modules. Space Stations also drift in space, and the coordinates do not remain static. In game-generated team mode maps there is a circular ring region (annulus) in the map without asteroids for the stations to orbit in.

The goal of Team Mode is to destroy all enemy bases. If the functional modules are destroyed, or it has no players after 15 minutes (all its players leave or run out of lives), the entire station is instantly destroyed, and no new players can join the team, and all existing ships of the team are immediately destroyed (this is to prevent endless retreat by players using faster ships such as the Shadow X-1).

Station modules have gem-backed shields, so the gems act as a shield, leaking out of the base to absorb damage to modules. In most cases, the base's gems will be completely depleted before a module is destroyed, but in some cases (such as AOW), modules can be destroyed even if the base still has gems, even above the repair threshold, and if a player deposits a gem, it will repair the module.

When a Level 4 station is filled to maximum crystal capacity, it does not upgrade to Level 5, but it allows upgrades to Tier 7 ships, until it loses a gem. Tier 7 ships cannot enter depots (to deposit to the base, gems must be given to other Tier 6 ships), although it is possible to leave a depot as Tier 7, by upgrading from Tier 6 to Tier 7 in the depot. 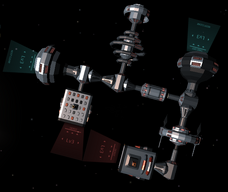 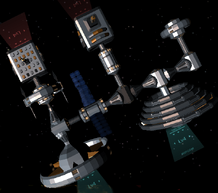 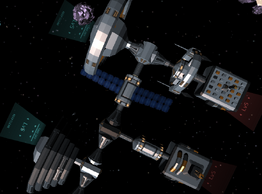 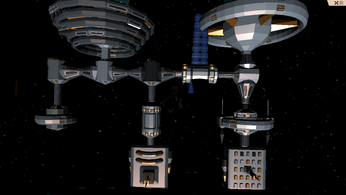 A normal space station has two spawn modules. These are one of 2 modules you have to kill to destroy the station. Spawn modules have more shield capacity and regeneration than structure modules. They serve to spawn new players into the map, and to respawn players when they are destroyed. They do not respawn ships that are a higher tier than their limit, which is the base level + 2. Upgrading to a Level 7 ship is possible when its Level 4 base is full on gems, but they cannot enter depots or respawn at the base if they have multiple lives in custom games.

Despite their seeming purpose, these are not essential. After they are destroyed, ships respawn at random coordinates on the map.

A normal space station has two depot modules. This is the other type of module you have to kill to destroy the station. These are the most important modules that also have the highest shield capacity and regeneration, which makes them nearly impossible to destroy with lower tier ships. An unlimited number of ships can enter a depot at once.

Additionally, Depot Modules have a 60 second timer per ship, started immediately upon entering the depot, forcing the ship to leave when it expires. Players can camp inside the depot to regenerate health or hide from enemies and re-enter after the timer is over.

If you want to be AFK, enter the depot before disconnecting. If possible, contribute all gems before disconnecting, but do not leave it AFK while contributing, which might give others a free kill. When you come back and accept the rescued ship, you will spawn with your old ship lives and credits and pods, but you will lose the gem cargo if you did not contribute it.

You also cannot damage ships that are inside a depot, but attack pods can still target players inside depots.

If all depots are destroyed, the station is a no-depot station. You cannot repair or upgrade a no-depot station, and you cannot change between attacking and healing. Either you should be killing the enemy's base before they kill yours, or you are about to lose. Usually, losing depots means losing the game, since if they can kill two depots, they can kill the two spawns even more easily. It is still possible to win without depots, especially if your team is strong enough to defend, which means you are strong enough to attack and win.

The station orbits the sun in a circular orbit with a period of 1 hour. For map size M and N teams, at time t (since the start of the game), team i (zero-based) has a station position of

For example, in JavaScript, for team 0, the station is at

It rotates clockwise at about one revolution per 10 minutes, with a starting angle of 90 degrees.