Success of Unstablecore LDB did not go unnoticed. Bombers are clearly a great concept, although their combat strength is somewhat low against fast, small, agile fighters. They are mainly designed for engaging large, slow targets, and Prototypes tests kinda lacked those. Yet that considered, Unstablecore turned out to be a worthy opponent even for agile fighters.

Another problem Unstablecore faced, which is fundamental to all inertial bombers, is the necessity to direct itself straight at the enemy to make own bomb connect.

Splitter addresses both issues. First, with its alternating-sides bomb launcher, which features extremely high recoil and reasonable DPS. Being a broadside weapon, it solves the issue of going at the enemy directly - and via its recoil, it makes Splitter extremely tough to hit, greatly increasing its combat potential. Yet, pilots often complain about its alternating nature - sadly, the protocols of Starblast didn't let the engineers solve that issue properly. 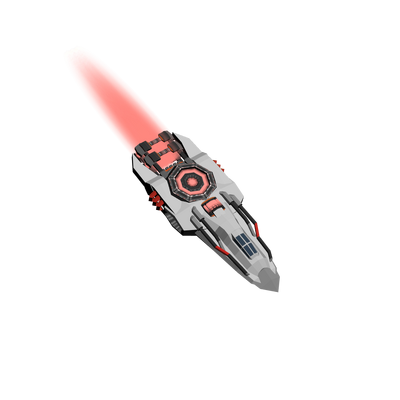 The former issue is addressed by this ship's Slug Burst, which is an AOE ability targeting enemy engines. This allows this ship to temporarily turn fast, agile fighters into worthless slugs, that can then easily and efficiently be bombed.