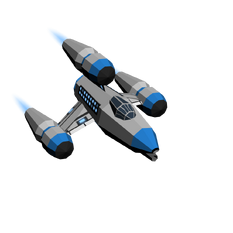 The T-Warrior has a very unique shot pattern, which can be devastating at close-ranges when all shots hit, but loses its effectiveness as distance increases. It is generally recommended to fully upgrade Energy Regeneration first, and proceed to the next tier, the Marauder or Condor. However, a fully upgraded T-Warrior can be deadly in ship duels, especially against large, bulky ships in surprise attacks. It is weak against agile moving ships or focused fire ships such as the Side-Fighter due to its high spread rate of its firing pattern. However, the T-Warrior's spread fire is supportive for fighting groups of enemies coming from different directions but is very weak if surrounded and attacked from the sides and behind. The T-Warrior is one of the best ships in its tier when fully upgraded and could easily defeat a tier 6 when it has enough attack pods. It is also very powerful when maxed with 4 attack pods and missiles.