Toscain was a Tier 5 ship in Starblast.io. It is a unique ship compared to other ships, firing four frontal lasers that diverge with varying angles, and one pulse that has slight knockback to the victim. It is effective at close-range and generally mines well, but is not very good at fighting other players.

It was replaced by the Howler on 1/28/2020 likely due to it not being very good and rarely used in game. 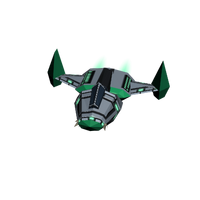 The Toscain when un-upgraded is a very poor ship, and even when fully upgraded, it is mediocre at best. While the Toscain has the second-best shields in its tier, it is slow, hard to maneuver and has weak firepower. It is generally best to upgrade quickly to the next tier, preferably the Rock-Tower, after upgrading a few stats as necessary. Avoid all other enemy vessels, but when confronted, do not attempt to flee. Ram and fire shots at point-blank ranges to ensure the enemy ship faces your full firepower. Despite this, chances are that you'll lose against most ships. Mine asteroids quickly by ramming and firing simultaneously. It is never worth upgrading the Ship Speed, upgrade your Shield Capacity and Regeneration first.

The Toscain used to work well with heavy mines, using heavy mines at point-blank range to help combat enemy vessels. Using this strategy, you were able to defeat almost any ship in the game, even tier 7 ships like the Bastion. This is not effective anymore because of a recent update that puts an arming delay on the mines.

The Toscain received a buff to its shields, energy, and damage on April 31st, 2017.

It is the second ship ever to get replaced.

This ship did make a comeback in the April 2020 ACW/AOW on PMF.

This ships is also available in the Rumble mod that was added to Modding space as of 9/4/2020.