The Trident is a Tier 2 ship in Starblast.io which fires two parallel front-facing lasers at a moderate rate of fire. While its base lasers deal a relatively low amount of damage, this means that the Trident can fire continuously without losing DPS. When the Trident runs out of energy, it fires alternatively from each side. This ship's attack, unlike the Delta-Fighter, does not weaken with range. 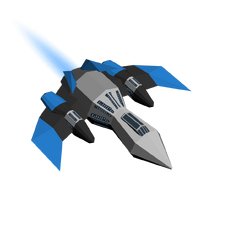 As a Tier 2 ship, the Trident is not strong by itself and best used for mining and upgrading to the next tier. Due to its poor combative ability, it is not recommended to upgrade unless made necessary by an enemy confrontation.

The Trident is likely inspired by the Klingon Bird-Of-Prey in the Star Trek Universe, due to its resemblance.