The U-Afterburn is a Tier 6 ship in the U-Series mod. It shoots two high damage pulses from the front while using its back lasers to propel itself forward at insane speeds. It is often the choice of ship for top players in the Alpha Centauri Wars event due to its ability to quickly escape fights. Prior to 4.0, it could easily kill many ships due to its high firepower, the ability to quickly escape, and insane shield regeneration. While the damage and shield regen were nerfed, it still can still deal 800 damage and escape quickly. It has high shield regen (better than the miner branch), speed (faster than all other speedsters), damage (almost as high as the U-Bruiser), and ability to ram lightweight ships (almost as good as the U-Smasher). Even after the nerfs, it is still considered the best ship in U-Series.

It is highly effective against the U-Smasher, since the propulsion of its back lasers can negate most of the knockback. With the high speed, you can dodge the U-Smasher many times before they hit you once. When hit by a U-Smasher, other lightweight ships typically fly into an asteroid and drop gems or die. With the U-Afterburn, if you shoot while you're flying, you'll instantly stop moving but still be stunlocked, and after the stunlock is over, you can move like normal. Waiting for energy to reach 420 and shooting the two pulses helps to clear the stunlock.

It is typically used as a hit-and-run ship to attack an enemy and dodge or run away, but it can also be used like the U-Smasher to ram lightweight ships into asteroids or finish off an enemy. With its speed, this ship is effective against single enemies and teams by picking off enemies one-by-one. This ship is at the top of the food chain, as it is a predator and all other ships are its prey. With its fast speed, this ship can chase down any other ship. Not even a U-Smasher can run away from the U-Afterburn.

Another good strategy if the other team has nobody at their base is to attack the base until they respond and then run away. If only one ship tries to defend, then just run to the other side of the base and continue to attack. At the least, you can delay their mining, and at the best, you can drain their gems or destroy a module.

It is somewhat effective against U-10 Thunders. Unlike the U-Smashers, it can use the frontal pulse to hit the enemy, you should have bullet speed maxed for more bullet accuracy. The U-10 Thunder has quite low mass, so bullets might stunlock it, max up damage for more stunning and damage performance. When it has been stunned, you can ram it with your insane speed and it is doomed if there are dense asteroid fields at its back. 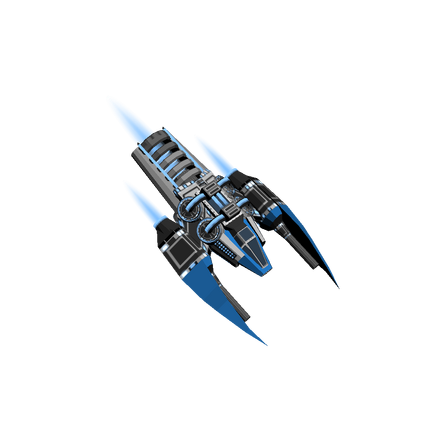