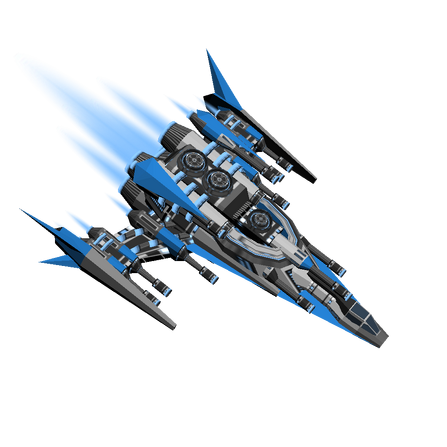 This ship is very good in combat, unless it's recharging or there are too many asteroids behind it, although that's less of an issue as a heavy ship, compared to asteroids for the lighter U-Arsenal. This ship can do 710 damage in one burst, while the U-Bruiser only does 520, but this ship recharges slower (175) compared to the U-Bruiser (200).

While the U-Barricade moves as fast as the U-Penta, faster the U-Arsenal and U-Punisher, it takes a long time to accelerate to full speed forward, but using recoil with RCS off can reach full speed quickly, although backward.

Its recoil helps it to escape with RCS off, and even if ships like the U-Afterburn and U-Smasher can easily catch up, just keep facing them and shoot them if they get too close. Similar to the U-Bruiser, it works best in surprise attacks to one-shot enemies or remove their shield. But it takes time to recharge, so be careful after attacking.

One good strategy is to have a U-Barricade, for attacking and while it attacks the enemy teammates, a U-Siege or U-Penta heals it. This strategy can help slow the enemy team from mining the base.

This ship is superior to U-10 Thunders, unless they escape with their ridiculous recoil and you won't catch up, as you have low acceleration. Also, remember that the tier 7 ships are actually downgrades compared to tier 6 and tier 5.