The U-Cruiser is a Tier 2 ship in the U-Series mod. It has two side cannons which fire high damage pulses and a central cannon which rapidly fires a pulse. 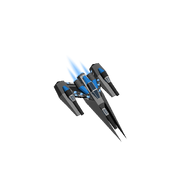 Although the U-Cruiser is usually not something you would want to remain as, they have some great advantages while you aren't able to upgrade to the next Tier. Remaining as the U-Cruiser after the enemy base is about to reach Level 2 is a bad idea, as other people will have much higher tier ships that will easily crush a U-Cruiser.

The U-Cruiser has somewhat good recoil, useful for escaping quickly. This can make mining a little hard, but not that much, since you are not that slow and can quickly get back to the asteroid to finish it off. Maxing agility first and then energy regen makes mining less annoying. The recoil can be used to hit-and-run when attacking, as it's the T2 version of the U-Arsenal.

Sometimes, the U-Cruiser would do very well against a U-Sentry or an H-Warrior due to its decent firepower and focused lasers. Even maxed Tier 3s can lose to a U-Cruiser if you use it properly and know how to aim. Particularly, its upgrades, the U-Penta and U-Spread, are easy kills, since they lack focused fire.

Like the U-Quad, it is very OP when maxed and should not be underestimated. Tread carefully when facing off against these, as you don't know if they're maxed or not and if the pilot is skilled or not.

Target its back when it is mining, then surprise-attack while it is turning to shoot you. Its weak spots is the back of the side cannons, and the main cannon. Shoot them at the sides so it can't turn while dealing damage to it. It is recommended to use the H-Warrior and the U-Sentry because of the high-damaging lasers. The H-Warrior has back lasers to retreat while damaging it and has frontal lasers which have high recoil and if you turn RCS off you can escape while damaging. The U-Sentry can use both lasers to attack and retreat.

Maxed tier 4+ ships can easily kill this ship, especially the U-Arsenal and the U-Siege.