The U-Fusion is a tier 7 ship in the U-Series mod, upgrading from the U-Perimeter, U-Bruiser, U-Afterburn, and U-Smasher. This ship fires a powerful Stream of pulses with high recoil similar to the U-Pulsar alongside smaller types of longer ranged lasers. The U-Fusion is designed to be used in team combat as a powerhouse using its high energy capacity to deal huge damage to a single enemy or segment of enemy base. This is the slowest and heaviest ship in the entire mod. As with all tier 7's, it is highly recommend to significantly fill the gem storage before engaging in combat, and to have backup. 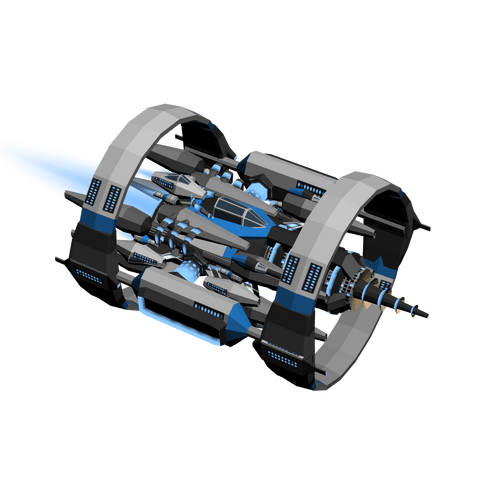 The U-Fusion has extreme focused DPS within a short range of itself. In 1v1 combat, this is hard to capitalize on due to most other ships being able to out-range the main pulse or outrun the ship's slow turning speed and terminal velocity. A smart player will tackle it with a teammate or run away. However, during group raids, this ship is very dangerous. Alongside ally ships that invoke movement in combat, such as the U-Smasher or U-Afterburn, it can pick off enemies that are trying to outrun it.

Fighting alongside allies also allows you to focus on shooting slower enemies or the enemy base as your teammates can cover your blind-spots. However, this ship falters on defense as even a small group of two or three raiding ships can easily kill you, and the shield Regeneration makes long attack raids difficult. Additionally, if your raid on the enemy base fails, you are almost guaranteed to die as this ship is too slow to retreat, and slow terminal velocity prevents recoil from being viable.

Overall, this ship is the definition of slow, bulky firepower. It is useless in chasing down enemies, and you must provoke enemies to come to you. While hard to win in a solo battle, it can provide deadly firepower in team attacks. As with the U-Wall and most Tier 7's in U series, never fly solo with this ship. Prior to version 4.0, this ship used to fire a stream of pulses and it was more agile. Because of its lack of agility, maxing the U-Perimeter (except for Energy Regen) essentially results in an agile fast-moving U-Fusion with 200 energy cap.

It is useful only as a support ship, as its only advantages are its high laser damage and mass.

If you look closely, there is a U-Sniper on its back, and on the sides.