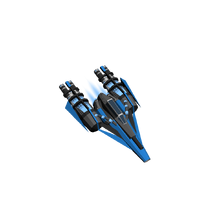 The U-interceptor may seem bad at first glance if you use the frontal cannon as your main weapon, but that's because most of the energy is used by the rear cannons, and most of the damage output comes from them. Using it as a hit and run ship with the rear cannons as your main weapon can be devastating, as if all shots from the burst fire connect it can deal up to 500+ damage in one pass, and the energy can regenerate to full in 2 seconds. This ship can take down tier 6's and even tier 7's when using this strategy. The easiest way to approach enemy ships when doing this is deactivating RCS and drifting towards them with the rear cannons facing the direction you are moving. I advise using the frontal cannon mainly when chasing down ships with low shields and empty or almost empty gem cargos in order to finish them off.

-Just a player, who mainly goes by Laser Cannon And its good for ramming a slow ships.It can replace u-smasher and with this ship you can destroy ships like a u-pulsar because a pulse s speed very slow and energy regen is slow but danger ships for u-interceptor is-u-bruiser,u-afterburn,hellfire,u-octa\perimeter\center(it have very big mass),u10thunder,(all tier 6 and 7 ships) and one of dangerous for u-interceptor is h destroyer and u-siege,u-arsenal,u-punisher\u-barricada and NEVER follow u-interceptor.-. you know what happen