The U-Marksman is a tier 7 ship in the U-Series mod, upgrading from the U-Afterburn, U-Smasher, Hellfire, and U-10 Thunder. This tier 7 ship is designed to be a sniper, shooting a single extremely heavy and fast shot at enemies with no other weapons other than a small rapid fire beam-type laser that deals the damage of an energy-empty un-upgraded Fly (10 DPS) and mostly exists in spirit of a laser sight. The secondary laser is rarely useful, only for finishing off an enemy with less than 30 health left. Using the secondary laser means it takes 743 ms longer to recharge the next shot (7.059 s instead of 6.316 s without it). 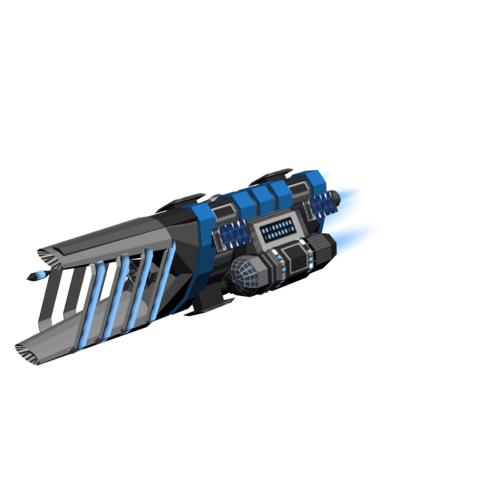 The U-Marksman is the ultimate 1v1 ship in the mod, its single shot capable of killing almost any enemy in an instant, unless they have defense pods, a decently filled gem storage, or are using a ship from the miner branch. Due to its massive sight range and unusually fast speed for a tier 7 ship, it is capable of shooting an enemy found on the radar from outside of their vision, leaving them no time to retreat if they don't know what ship you are using.

Even when dealing with small groups, one can pick them off one by one, as this ship's massive range and good speed can allow it to snipe an enemy from a long way away and then retreat until the next shot is charged. When dealing with larger groups of more than 3 or 4 members however, this strategy can prove fatal to yourself as the ship's energy can't regenerate fast enough to kill everyone before they chase you down and kill you.

If your team is losing and your base is being raided, this ship is one of the worst defenders in practicality. Although most players don't ever think of using defense pods to completely ignore the damage from this ship, the sheer number of enemies will have you overwhelmed in seconds. If you attempt to play the defensive game safe and snipe attackers from a distance, it likely that an enemy of the speedster branch will get fed up with your antics and assassinate you. Even a skilled H-Warrior can defeat this ship.

Although this ship has a relatively high mass, it is still prone to being kicked around by the U-Smasher. If an enemy Smasher is attempting to target you, save your shot for when they attempt to ram you. This will mitigate the damage from their charge as your shot will slow the enemy down as well as drain the majority of their shields. If the server has several Smashers, stay away from asteroid fields, as even a grazing pass can send you flying into the obstacles, killing you.

Another downside of this ship is that due to its very focused power in a single shot and relatively weak shields, it is not a great mining ship, and you may have to depend on teammates to give you gems to prevent your death. Good luck with that, though!

During base raids on an enemy base however, this ship can safely deal massive damage to individual segments of an enemy base, or can be used to pick off annoying defenders that try to defend against the slower members of your team. If an enemy is on the run from a teammate, you can predict where they will move next and fire while they aren't aware of your plan.

Overall, the U-Marksman is the ultimate instakill force of the U-Series. With its massive high power bullet, it can wipe almost any ship from existence in 1v1s or against small groups. One shouldn't get too cocky, as a group of confident players can overwhelm this ship very quickly. Also, a single Tier 4 U-Center (maxed except energy regen) with 1 gem would win in a 1v1: it can survive your shot and easily kill you in 2.2 seconds if you don't have any gems (even with full cargo, you'll be almost dead when your second shot has recharged). A Tier 5 U-Octa with maxed shield and full gems is unkillable in a 1v1, as long as it can pick up all of its gems in 6.3 seconds (500 gems plus 126 regen while your shot recharges > 600 damage), and its damage can remove your shield in just 2.1 seconds and kill you before your shot recharges. Snipe passing enemies when the opportunity arises, and try to target larger and bulkier enemies. While you can take down the shield of enemies, or finish weak enemies, you still should rely on teammates for help.