The U-Pulsar is a tier 5 ship in the U-Series mod. This ship operates like a glass cannon, being quite fragile with its low shields and mass. However, the two slow 'pulsars' that it fires each cause MASSIVE amounts of damage, being able to take down even the U-Octa's shields. It is also one of the faster ships in the mod, excluding the bullet dashers. This ship is more or less an all-purpose ship, since it really has decent overall stats. If used to attack, it is best to catch one or two ships off-guard and nail the enemy from behind with both pulsars. If fighting a group, it is best to run unless they are bullet dashers. If a ship with low mass is attacking you head on, shoot the enemy at an angle to cause them to spin.

The Shadow X-27 is a better version of this ship with much faster shots and better damage.

Avoid speedster branch ships, because your pulsar shot is slow, and speedsters can make you miss shots and kill you before you can kill them. This ship is a drawback, but only ship to reach the U-10 thunder. 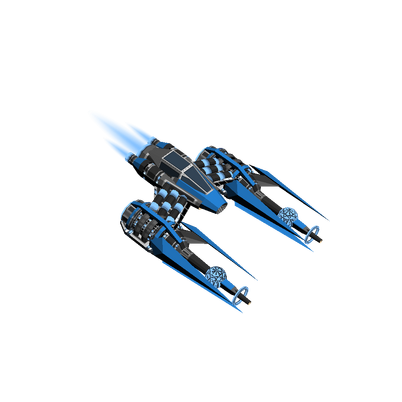